Time to get flu shot is now, doctors urge: Or ‘roll the dice’ – Fox News

Prompt uptake of the flu vaccine can also reduce the burden on the medical system and protect at-risk populations from poor outcomes like hospitalization and death. According to the Centers for Disease Control and Prevention (CDC), everyone 6 months and older should get a flu vaccine every season with rare exceptions.

“It’s perfectly reasonable to get vaccinated right now,” Dr. Stanley Deresinski, clinical professor of medicine and infectious diseases at Stanford University, told Fox News, noting the recommendation to get a flu shot extends through the end of October. “You could roll the dice and get it later with the assumption that the flu season is going to come later wherever you are.”

CLICK HERE TO FIND A COVID-19 VACCINE NEAR YOU 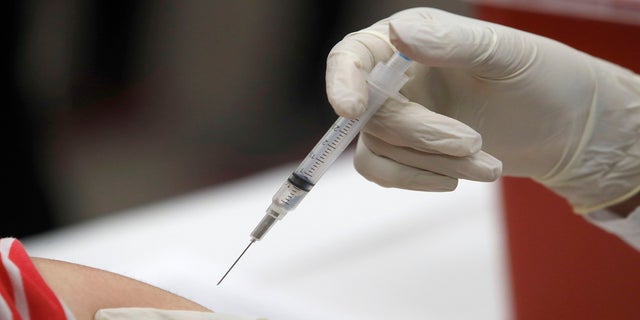 Experts owe the historic low in flu activity last year to preventive steps taken during the COVID-19 pandemic, such as masking, distancing and hand hygiene. Dr. Gregory Poland, infectious disease expert and director of the Mayo Clinic’s Vaccine Research Group, worries over a potential so-called “tridemic” this year with the overlap between COVID-19, influenza and RSV [respiratory syncytial virus] cases, albeit difficult to predict.

Doctors begin to worry about the flu in October, with cases typically picking up in November-December, while the West Coast tends to see peaks later in the season, Deresinski said. Most flu cases involve the upper airway, with symptoms like sore throat and a persistent cough, but some infections can progress down into the lungs causing pneumonia, which can be lethal, he added.

As of Sept. 18, 2021, the proportion of outpatient visits for influenza-like illness activity remained minimal-to-low across nearly all U.S. states, according to data reported to ILINet, a CDC-led flu surveillance network. 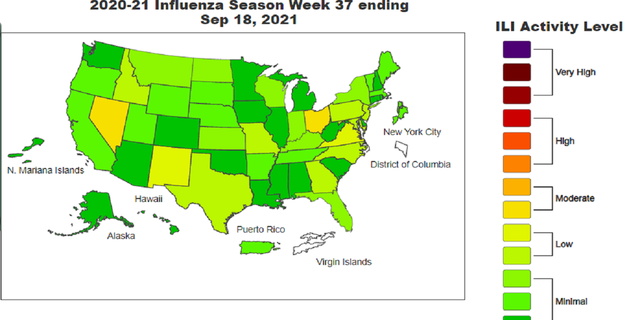 Federal data indicating the proportion of outpatient visits to providers for flu-like illness.
(Centers for Disease Control and Prevention, CDC)

Meanwhile, national positive PCR-tests for RSV, a common respiratory virus typically resulting in mild, cold-like symptoms, increased from about 1% in mid-April to 12.8% by Sept. 25, suggesting an unusual summertime uptick. RSV can be problematic for certain age groups, such as infants because it can cause bronchiolitis, affecting the lower lungs, Deresinski explained, while also noting potential issues for adults with immunocompromising conditions. Most RSV infections resolve on their own and there is no specific treatment for RSV, though efforts to develop medicines are underway, per the CDC. To ease symptoms, the agency advises acetaminophen or ibuprofen, plenty of fluids and consulting a healthcare provider.

The three respiratory illnesses at hand (COVID-19, influenza and RSV) cause overlapping symptoms, and experts told Fox News it’s difficult to reliably differentiate between them, causing a significant issue as the U.S. heads into the colder months and providers faced with testing patients for multiple respiratory pathogens.

“Imagine having COVID and flu together, what does that do to your complication rate, to your risk of dying, especially if you have an underlying disease or you’re elderly?” Poland said.

New findings released Thursday indicated it was safe to receive a COVID-19 vaccine and flu shot at the same time, per a British study, further supporting U.S. health recommendations on co-administration of vaccines.