The Titans are proving that they may be the elite team of the AFC.

The Titans, who are on a five-game winning streak, have victories over the Seahawks, Bills, Chiefs, Colts, and Rams.

In Week 9, their first game without superstar running back Derrick Henry, the Titans cruised to a 28-16 win over the Rams in Los Angeles. They forced Matthew Stafford into two interceptions, one of which was returned for a touchdown by safety Kevin Byard. Defensive tackle Jeffery Simmons had three of Tennessee’s five sacks in the win as well.

Tennessee’s dominating victory catapulted them into the top tier of teams in this week’s power rankings. 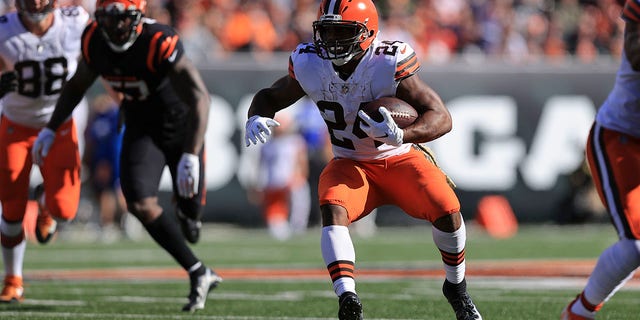 Cleveland Browns’ Nick Chubb (24) runs during the first half of an NFL football game against the Cincinnati Bengals, Sunday, Nov. 7, 2021, in Cincinnati.
(AP Photo/Aaron Doster)

Outlook: No Odell Beckham Jr., but it didn’t matter for the Browns.

Quarterback Baker Mayfield completed 14 of 21 passes for 218 yards and two touchdowns and running back Nick Chubb had 137 yards rushing with two scores to power Cleveland’s offense. Next, the Browns will be tested when they travel to New England to face the Patriots. 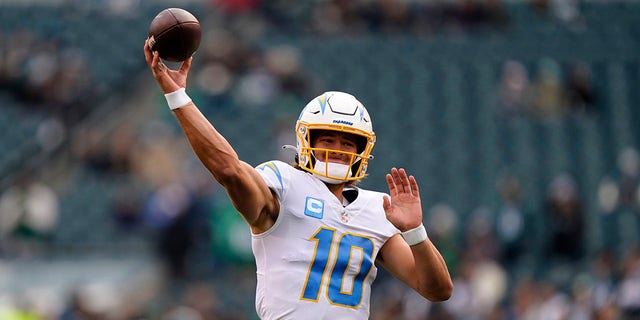 The Oregon product completed 32 of 38 passes for 356 yards with two touchdowns and wideout Keenan Allen hauled in 12 receptions for 104 yards in the win. The Chargers put an end to their two-game losing streak and they will look to make it two wins in a row when they host the Vikings next. 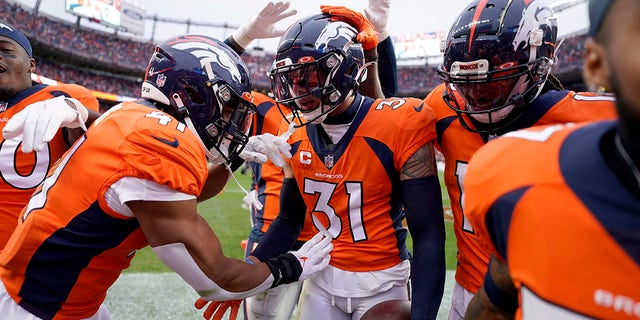 Denver Broncos free safety Justin Simmons (31) celebrates his interception against the Washington Football Team during the first half of an NFL football game, Sunday, Oct. 31, 2021, in Denver.
(AP Photo/Jack Dempsey)

Outlook: It was a game the Cowboys would like to forget.

At one point, Dallas trailed 30-0 before quarterback Dak Prescott threw two touchdowns to Malik Turner in the final five minutes of the game to get the Cowboys some points. Could Prescott be hurt? Or maybe the Cowboys were just off? Only time will tell and it starts this week against the Falcons. 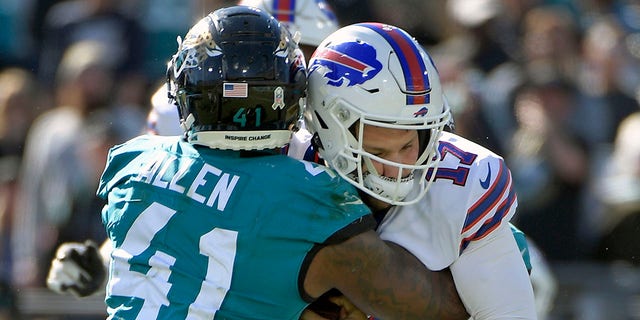 Outlook: It was likely Buffalo’s most embarrassing loss over the last two seasons.

The Bills couldn’t get anything going on offense. Josh Allen completed 31 of 47 passes for 264 yards with two interceptions. As a team, Buffalo had three turnovers. This could certainly be a wake-up call for the Bills as they look to get their season turned around against the Jets this week. 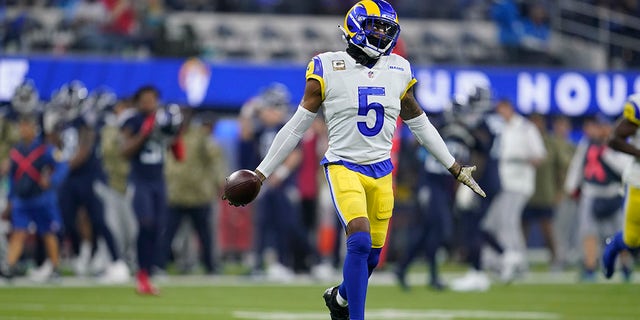 Los Angeles Rams cornerback Jalen Ramsey reacts after an interception during the first half of an NFL football game against the Tennessee Titans, Sunday, Nov. 7, 2021, in Inglewood, California.
(AP Photo/Marcio Jose Sanchez)

Outlook: It was a brutal outcome for the Rams, but it was only their second tally in the loss column this season.

Offensively, the Rams couldn’t get much going. Matt Stafford completed 31 of 48 passes for 294 yards with one touchdown and two interceptions in the loss. Los Angeles will look to bounce back against the 49ers next. 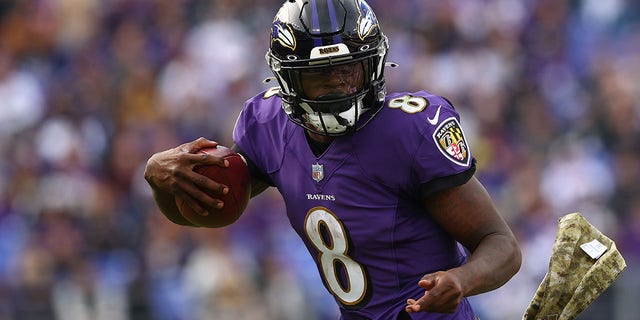 Quarterback Lamar Jackson #8 of the Baltimore Ravens runs with the ball against the Minnesota Vikings in the second quarter at M&amp;T Bank Stadium on Nov. 7, 2021 in Baltimore, Maryland.
(Todd Olszewski/Getty Images)

Outlook: Another week, another dramatic win for Baltimore.

Lamar Jackson completed 27 of 41 passes for 266 yards with three touchdowns and two interceptions and added 21 carries for 120 yards on the ground in the overtime victory. Kicker Justin Tucker booted a 36-yard field goal for the win. Next, is a matchup with the Dolphins on Thursday night. 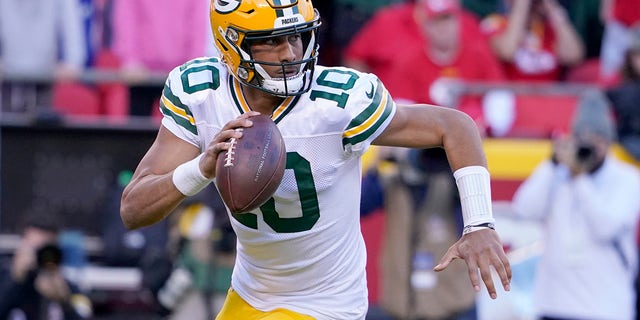 Green Bay Packers quarterback Jordan Love drops back to pass during the first half of an NFL football game against the Kansas City Chiefs Sunday, Nov. 7, 2021, in Kansas City, Montana.
(AP Photo/Ed Zurga)

Outlook: Star quarterback Aaron Rodgers missed the game against the Chiefs and it clearly showed. Backup Jordan Love threw for 190 yards with one touchdown and one interception and they really didn’t do much offensively.

The Packers didn’t drop much because they were without Rodgers. But they will look to get back on track against the Seahawks this week. 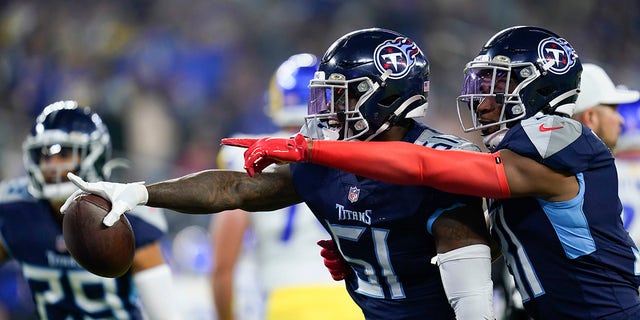 Outlook: The Titans are rolling – even without Derrick Henry.

Winners of now five-straight games, Tennessee dominated defensively in its game against the Rams. The Titans pilled up five sacks and intercepted Matt Stafford two times, one of which was returned for a touchdown by safety Kevin Byard. Next up is a big matchup with the Saints. 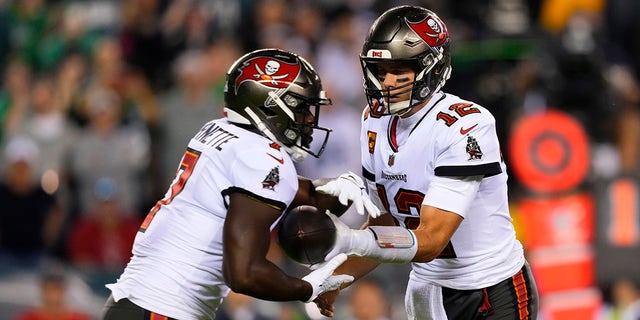 Outlook: The Buccaneers will look to get back to their winning ways.

Before their bye, Tampa Bay was handed a 36-27 loss to the Saints in New Orleans. Quarterback Tom Brady threw for 375 yards and four touchdowns but had two costly interceptions. The Bucs will head on the road to take on the Washington Football Team this week. 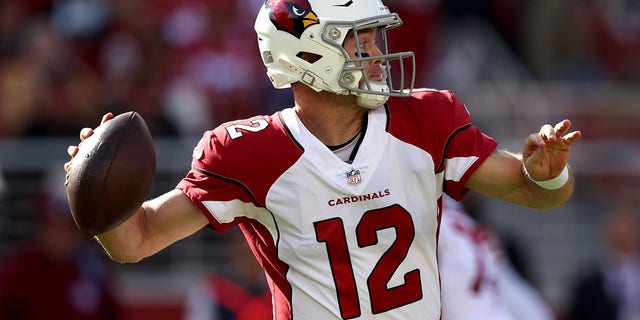 Colt McCoy #12 of the Arizona Cardinals throws the ball during the first quarter against the San Francisco 49ers at Levi’s Stadium on Nov. 7, 2021 in Santa Clara, California.
(Ezra Shaw/Getty Images)

Outlook: No Kyler Murray, no problem.

Backup Colt McCoy filled in and threw for 249 yards and one touchdown, and running back James Conner had 96 yards rushing and 77 receiving yards with three total touchdowns in the victory. Next up, a matchup with the Panthers.