Share
Facebook
Twitter
Pinterest
WhatsApp
A series of controversial calls marked a game that — at 20-6 in the third quarter — had looked set to be a comfortable home victory for the Steelers, but an inspired fourth quarter performance from Bears rookie quarterback Justin Fields left the hosts facing a shock turnaround.

The Steelers retook the lead for the final time through Chris Boswell’s 40-yard field goal 26 seconds from time but were still forced to endure a nail-biting potential 65-yard game winning kick from Bears kicker Cairo Santos.

To Pittsburgh’s relief, Santos’ kick dropped just short — securing the win and making it 19 straight victories at Heinz Field for the Steelers when playing on a Monday night.

Steelers linebacker T.J. Watt dazzled on the defensive side with seven tackles and three sacks — his second of the game on Fields taking him to an incredible 60 career sacks in just 69 games, the fourth fastest player in history to reach this milestone.

Only Cleveland Browns defensive end Myles Garrett has more sacks than Watt’s 11.5 this season, with 12.

READ: What’s next for Aaron Rodgers and the Green Bay Packers? 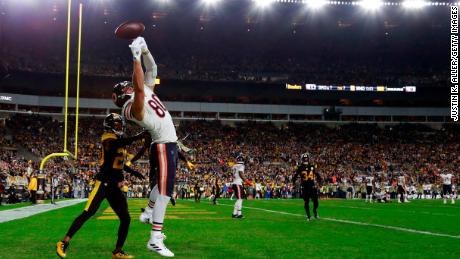 Despite Watt’s heroics, it was a particular sack on quarterback Ben Roethlisberger that dominated much of the coverage — the subject of one of several controversial calls during the game.

Cassius Marsh of the Bears was penalized for taunting by referee Tony Corrente following his third-down sack on Roethlisberger — giving the Steelers a first down and an eventual field goal — and Marsh subsequently claimed he was “hip-checked” by Corrente moments before he was flagged.

“On my way to the sideline, I got hip-checked by the ref. It’s pretty clear,” Marsh said after the game.

“If I was to do that to a ref or even touch a ref, we get kicked out of the game and possibly suspended and fined. I just think that that was incredibly inappropriate.

“I think that one was just bad timing. It’s pretty clear to everybody who saw it that I wasn’t taunting.

“I’ve been doing the celebration my whole career. It’s just sad to see stuff like that happen in a close game like that.” 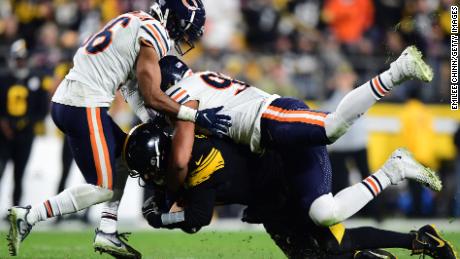 Corrente spoke to a pool reporter after the game to explain his decisions.

“First of all, keep in mind that taunting is a point of emphasis this year,” Corrente said.

“And with that said, I saw the player, after he made a big play, run towards the bench area of the Pittsburgh Steelers and posture in such a way that I felt he was taunting them.”

On the alleged contact with Marsh, Corrente said: “That had nothing to do with it. It was the taunting aspect.”

The result continues the respective rise and slide of both teams. Having gone 0-3 in Weeks 2-4, Monday’s victory extends the Steelers’ streak following wins over the Denver Broncos, the Seattle Seahawks and the Cleveland Browns.

Meanwhile, the Bears drop to 3-6 with a fourth successive defeat, but they will take heart from the manner in which they lost — a stark contrast to the 38-3 thrashing at the hands of the Tampa Bay Buccaneers last month — and the electric fourth quarter performance of Fields.

The 22-year-old threw for 291 yards overall — a personal best for the season — and a touchdown pass to Darnell Mooney to rally his team in the fourth, a display that did not go unnoticed by Bears head coach Matt Nagy.

“The big picture, for him, is great,” Nagy said, discussing the drive. 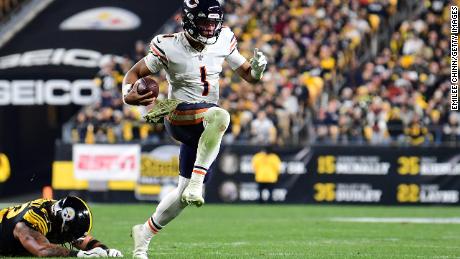 “When they kicked that field goal and went up six, there was a really, pretty neat moment on the sideline. You can feel it from the players, like, ‘OK, we fought back to get to this point where a touchdown wins it.’

“Then I looked over at Justin, and he had this smile on his face where it was like, it was his time. To see that, the confidence that gives you as a coach when you see that — it was like he was almost hoping that this was going to be the situation.

“Then for him to follow through with that and make those plays that he made, it was a really, really good feeling on that sideline. So when you talk about the growth for him and for the offense and just our team in general, that’s a moment.”