Earlier this summer EA made horror fans dreams come true, when they officially announced a Dead Space remake, but the initial reveal was a bit thin on details. Thankfully, Montreal-based Dead Space remake devs Motive Studios just dropped a new livestream, showcasing some very early pre-production footage, changes to dismemberment and zero-G gameplay, and details about how the story is changing. If you have around half an hour to spare, you can check out the full Dead Space stream, below.

The developer livestream kicked off with a quick, early look at how Motive is updating the game’s environments with new details, shaders, lighting, effects, and more. Here’s a nice comparison shot of an iconic hallway in the original game and the remake. 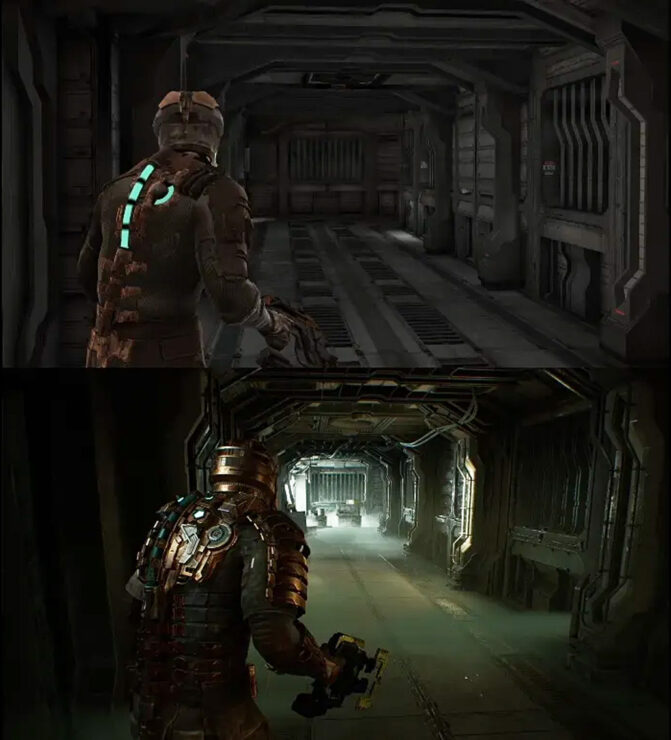 Motive are also making big changes to the game’s dismemberment system. In addition to being able to slice limbs off with your Plasma Cutter, there’s also a new “peeling” system, that allows you to strip flesh of Necromorphs’ bones using concussive weapons. It’s as gruesome as it sounds. Zero-G gameplay is also being updated to be more in line with the Dead Space sequels.

We’re not gonna change the foundation of the story, because that story is really iconic. It’s just a great sci-fi horror story. […] The things we want to enrich, it’s really about the bigger universe of Dead Space. We want to have more ties with what came after, whether it’s the books, the anime, Dead Space 2. We want to put back the original […] in that broader universe.

Also, we wanted to build a bit more on some of the characters. Whether it’s Kendra or Nolan. One thing for me that’s really important in Dead Space is, as Isaac, you’re looking for Nicole, but actually in game… not so much. That’s something we want to improve. We want to give you the means to actually look for her. More than look for her, learn what happened to her during the outbreak.

Campos-Oriola also confirmed that Isaac will be voiced in the new Dead Space, with the voice actor who portrayed him in the sequels, Gunner Wright, returning.

The new Dead Space is coming to PC, Xbox Series X/S, and PS5. A release window has yet to be set. What do you think? Eager to get peeling some Nercromorphs?

The links above are affiliate links. As an Amazon Associate, Wccftech.com may earn from qualifying purchases.