It sounds like Odell Beckham Jr. is trying to force his way out of Cleveland, and the Browns wideout may get his wish. A source told Mary Kay Cabot of Cleveland.com that Beckham’s stint with the Browns has likely come to an end, and the only question is how the organization will let go of the veteran receiver. 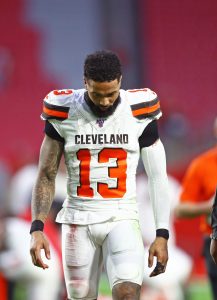 Beckham’s contract is the main complication surrounding a divorce. The wideout is still owed $8MM this season, and there’s a limited number of teams with the required cap space to claim the player off waivers. ESPN’s Jeremy Fowler tweets that Beckham could also “claim termination pay,” ensuring he’ll receive the rest of his money. If Beckham isn’t claimed on waivers, this means the Browns would be left with a significant chunk of dead cap.

The Browns considered moving Beckham at the deadline, discussing a trade with the Saints. Ultimately, the team held on to the receiver, but that was before the player’s father took to social media to criticize Baker Mayfield and the quarterback’s inability to click with his top receiver. Then, LeBron James chimed in, seemingly urging the Browns to trade his friend before the deadline. One day later, Beckham is still in Cleveland, though he’s absent from practice with a “personal matter”. For what it’s worth, Mayfield said earlier today that he’d welcome a conversation with Beckham and would prefer the receiver sticks with the team.

Beckham, 29 on Friday, has four 1,000+ yard seasons to his credit, but has yet to approach his gaudy 2015 and 2016 numbers with the Giants. Following a 2020 campaign where OBJ was limited to only 319 receiving yards in seven games, the veteran has collected 232 receiving yards in six games this season.