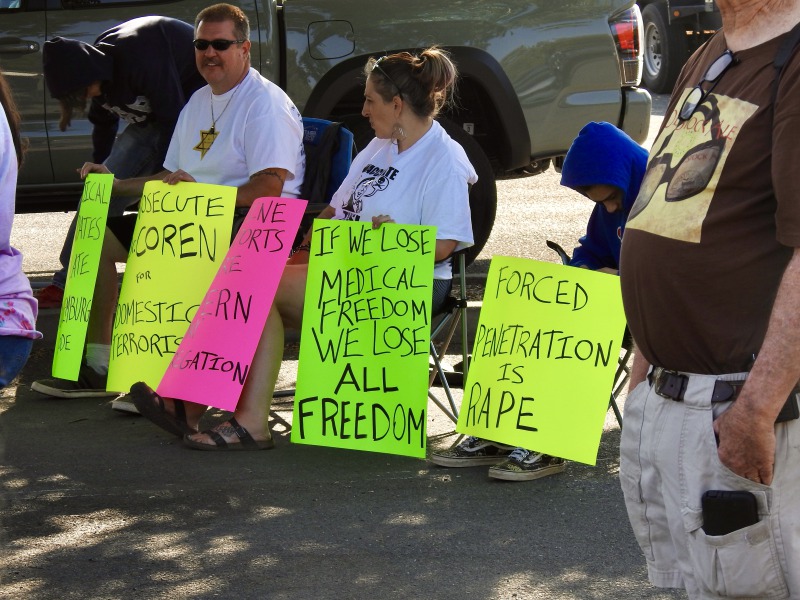 Many of those attending the event held signs. [All photos by Matt LaFever]

At 9:30 a.m. on Saturday, September 4, 2021, Mendocino County Public Health Officer Doctor Andy Coren and owners of Mendocino County restaurants and businesses met for an outdoor town hall in the parking lot of the Ukiah Valley Athletic Club to hash out the growing conflict between local businesses and public health regarding potential vaccination mandates within restaurants.

Dr. Coren suggested to the Board of Supervisors on Tuesday that Public Health was considering requiring restaurant employees and vaccination screening for customers as they attempt to control the current surge. He told the Board of Supervisors they “protect employees and patrons without harming access to business or the community’s access to food.”

This announcement galvanized local business owners to propose an event in which public health and proprietors could dialogue about how pandemic protocols have affected their bottom lines and what they would be willing to do to further public health’s goals in mitigating viral spread.

The two primary organizers of the event were Stephanie Dunken of Slam Dunk Pizza with locations in Ukiah and Willits as well as John and Lauren Strangio, owners of the Ukiah Valley Athletic Club.

Lauren Strangio put an all-call out to the Mendocino County business community earlier this week encouraging interested parties to present to Dr. Coren how the pandemic has affected their ways of life and the implications of having a vaccine mandate for employees and customers could have on staffing and income. Strangio made a point to state the conversation would “not be about vaccination status. We believe in everyone’s right to choose.” In her call to action, Strangio asked participants to “not make this political,” to “form all opinions with factual information, and “be respectful.”

The outdoor town hall was held in the parking lot of Ukiah Valley Athletic Club on South State Street with over 100 gathered, the majority of those attending held signs of the businesses they represented. 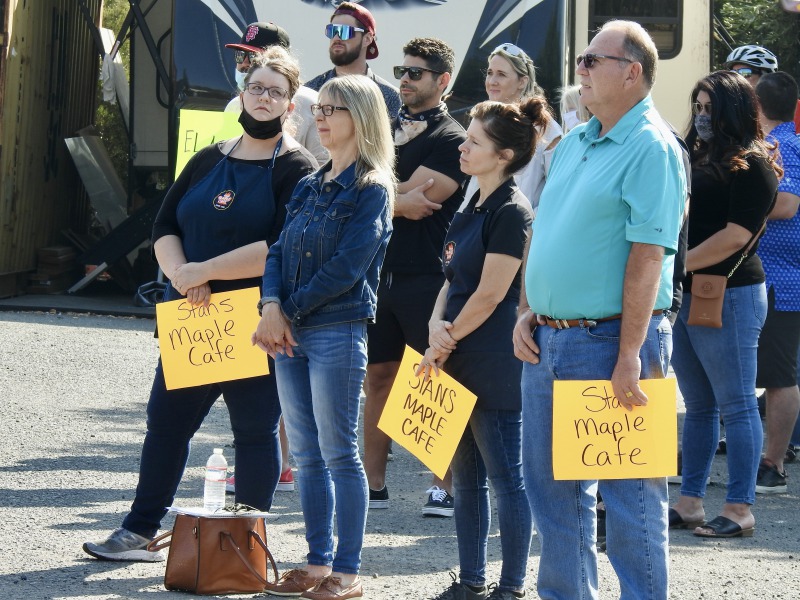 The town hall began with a series of speakers describing the pandemic’s effects on their income, their employees, and their ability to support their communities.

John Strangio began the meeting expressing his gratitude at the business community’s willingness to come together to dialogue with Dr. Coren about how Public Health and businesses could collaborate. He said, “I have not heard of anywhere else in the state that the public health officer gives his time and energy to understand what his community really wants.”
Strangio also made clear that any shaming, shouting, rude, or disrespectful participation in the proceedings would not be allowed and reminded attendees the meeting was held on private property and if they chose to engage disrespectfully they would be asked to leave.

Slam Dunk’s Stephanie Dunken described a 1.5 million dollar loss in their business’s income and painted a striking image of a pizza parlor, long a place of the community of events and family fun, shuttered and dark after the pandemic protocols took effect. Dunken said she fears violence against her or her employees if they are required to screen customers for vaccines– “I ask for a vaccine card, and I get a gun in my face.”

Matthew Talbert of Left Coast Seafood gathered with a number of his employees on the stage and said he and his team attended today’s town hall “to create a greater solution.” Before instituting any sort of vaccination mandates on customers or staff, Talbert hoped “we exhausted all other alternative solutions that could achieve the same result.” Ultimately, Talbert said both local businesses and Public Health could “work together to help protect our community.”

Alex Ibrahim, the owner of Stars Restaurant in Ukiah, told the crowd he immigrated to the United States from Jordan seeking a “free country” and he said he hopes the US stays one. He said he spent $75,000 building the outdoor dining patio placating pandemic protocols. Ibrahim also presented data gathered from the State of New York that indicated only 1.42% of COVID-19 community spread was attributable to restaurants, yet “we were targeted more than any other sector,” he said.

A trio from Ukiah restaurant Tastebuds questioned how it was that big-box retailers like Costco and Home Depot were open to full capacity while local restaurants faced harsher protocols.

Ashleigh Plazola, both a co-owner of Ukiah’s Cultivo and Hanger 39 restaurants, as well as an intensive care unit nurse at Adventist Health nurse in Ukiah Valley, spoke to the conflict she navigates in both her community roles. She described seeing “both ends of the spectrum. I don’t want people to continue to die, but I don’t want my restaurant to close either, I don’t want to lose my employees, I don’t want to piss off my community.” Plazola described a resentment that she sensed has brewed between local health care workers and businesses. She reminded attendees “many of our hospital staff dine at your restaurants, purchase items from your stores” and called for unity.

Regarding the COVID-19 surge and the realities health care workers face, she said “people do not feel this is a true pandemic because you do not see it.” She characterized the work of health care workers as “extremely difficult.” She explained,”“Doctors and nurses are getting COVID.” 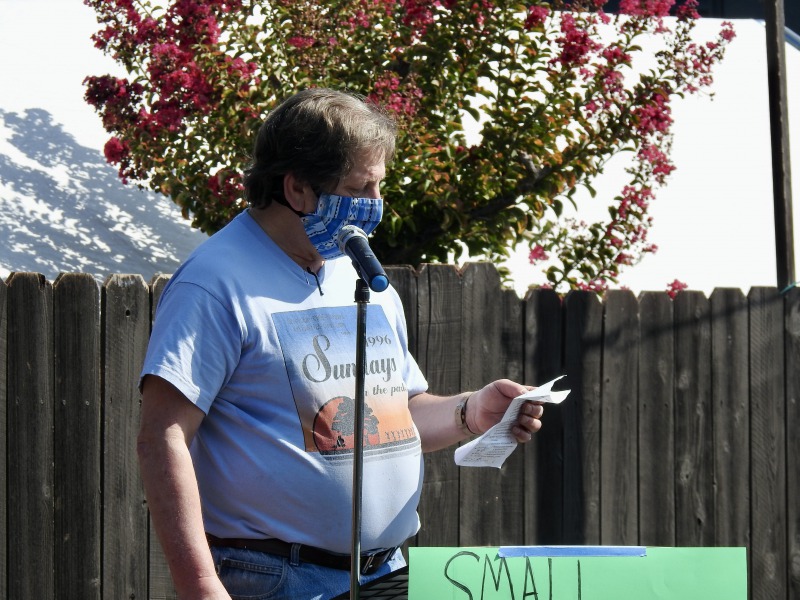 Dr. Coren looking at notes during his talk to those attending the Townhall.

When Dr. Andy Coren took the microphone, he first began by updating the attendees on what he called the “fourth wave” of COVID-19 fueled by the contagious Delta variant. When he asserted that the safety of the COVID-19 has been better monitored and surpassed the safety of every other vaccine, some attendees shouted “propaganda.”

Dr. Coren said the most significant body of data Public Health utilizes regarding local protocols is “contact data and contact tracing.” That data gathering has been hindered, Dr. Coren said, because “over half are hanging up on contact tracers. That lack of cooperation is hurting us in terms of the data.”

Dr. Coren faced down comments, boos, and snark by a small but vocal portion of attendees as he gave Public Health’s reasoning behind putting in place stricter measures to control the fourth surge. Despite the disruptions, Dr. Coren celebrated the “Mendocino Citizen’s town hall” describing it as the “first time this has happened. I am honored to be a part of it.”

He said, “I don’t like writing orders for people or communities. Suggestions are much more my style. It provides the give and takes.”

Dr. Coren went on to explain the focus on restaurants stemmed from empirical and theoretical data that places of dining are ripe for viral spread. He said the suggested protocols are based on two parts: “In order to protect our staff, I suggested that staff either vaccinate or test. For patrons, if they wish to eat inside, we want to verify vaccination or allow those that do not verify to eat outside.”

He said that one of his main reasons for attending today’s town hall was to hear from business owners’ suggestions as to how Public Health can create protocols that both support business while mitigating viral spread.

As the town transitioned to a comment/question portion, a particularly irate attendee began to shout “666! The Mark of the Beast” which seemed to be a reference to the COVID-19 vaccine. Lauren Strangio shouted into the microphone the attendee’s presence was not welcome and “We need good feedback right now, not someone yelling. You are not helping us help our businesses.” 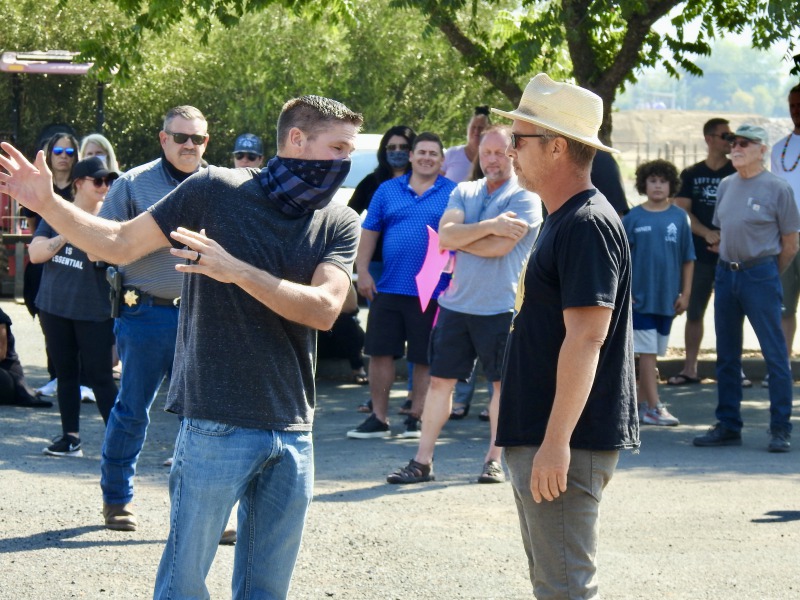 John Strangio (left) asking an attendee (right) to leave after he kept referring to COVID-19 vaccines as the mark of the beast.

The comment/question period was punctuated by attendees who seemed to focus more on how pandemic protocols were an impediment on their freedom. Dr. Coren simply responded, “If you take advantage of those freedoms, you can end up hurting other people in the community.”

Alex Ibrahim of Stars Restaurant suggested Public Health work to procure more antigen rapid tests for local business owners so they can be utilized to diminish viral spread and reduce the cost on businesses.

He also said his business and others would be willing to display large posters/signage encouraging vaccinations and masks as a show of solidarity — instead of “mandating, educating,” he urged.

Laura Strangio concluded the Townhall hoping to “leave on a positive note” celebrating the dialogue that had occurred. She encouraged all local business owners to contact her if they had any specific suggestions to offer Dr. Coren and they would be passed on.

Stephanie Dunken, in the last call for solidarity, reminded employees that the Mendocino County community is “great at coming together during adversity. We need to work together and support each other.” 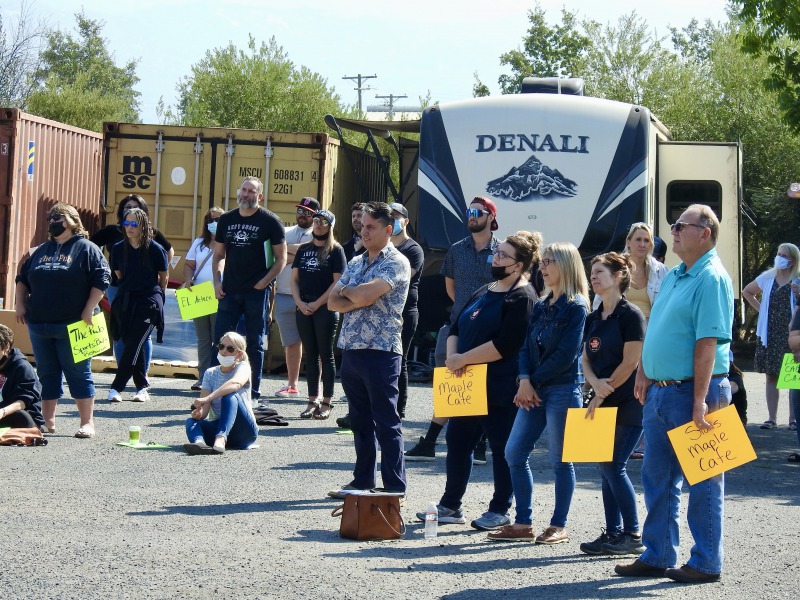