The last time I checked in on how laptops were faring with 4K gaming in 2019, things weren’t looking so hot. Nvidia’s last-gen RTX 20-series mobile chips couldn’t work hard enough to smoothly run demanding games at 4K without several compromises to visual fidelity. Fortunately, things have changed for the better this year with the RTX 3080 — specifically, for the X17’s high-powered 16GB VRAM variant.

The X17’s 3080 has a maximum graphics power level of 165W and a boost clock speed of 1,545MHz. That’s really powerful for a mobile GPU and close to the highest amount of power that Nvidia allows for its mobile graphics chips. It’s certainly the most graphically capable laptop that I’ve tested yet.

I’ll get to the performance numbers in a sec, but it’s important to note near the top that this is one of Alienware’s best gaming laptops yet, and not only because it whips at gaming. Its X-series design is new for 2021, resulting in a slimmer and sleeker look that balances form and function better than most other models that have similar power levels without foregoing ports (more on that later). For gaming and other intensive tasks, its cooling system is efficient, keeping this 17.3-inch 4K beast both cool and surprisingly quiet. And even when you’re doing other stuff, the clicky Cherry ultra-low-profile mechanical switches are fun to type on. It’s a heavy laptop that you probably won’t want to lug around to many places, but functionally, the X17 is almost as good for work as it is for gaming. 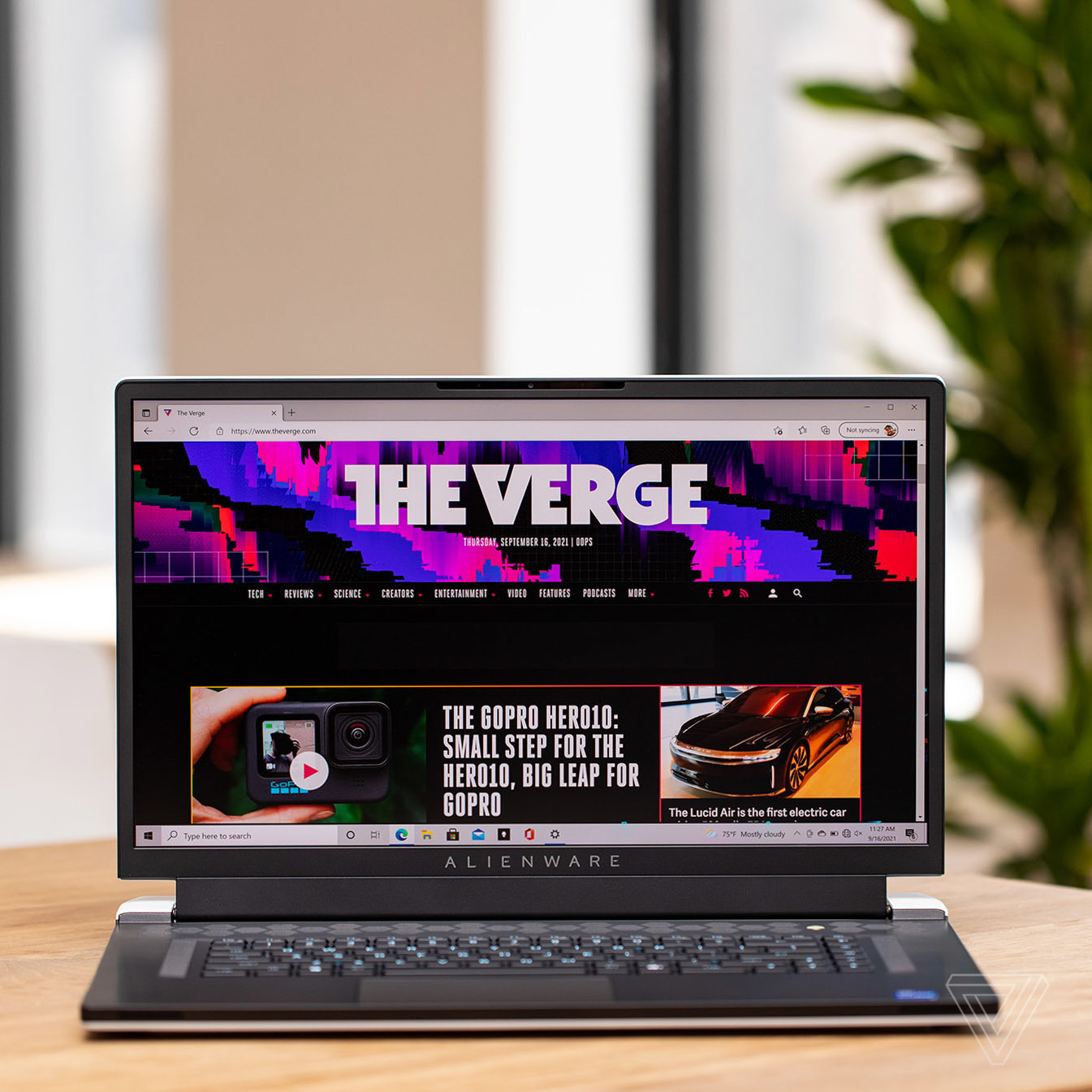 Despite these glowing remarks, if you were to ask me if you should buy this specific gaming laptop, I would advise against it unless you’re dead-set on getting a powerful 17.3-inch gaming laptop. It’s a tough sell at its $3,680 asking price, as configured. (I will note that this similar MSI GS76 Stealth configuration costs hundreds more than the X17, but has twice the amount of RAM. Razer’s latest Blade 17 costs $3,699 and has a 4K/120Hz touchscreen and a more capable processor, but has less storage, as configured, and its GPU isn’t as powerful.) Also, since I received this unit for review, Alienware has paused on accepting new orders because it needs to catch up with its supply chain backlog. A spokesperson said Alienware intends to offer it for sale again at some point in the near future.

To test X17’s gaming performance, I ran some titles that have proven to be demanding at their highest graphical settings, starting with Red Dead Redemption 2. At native 4K without Nvidia’s deep-learning supersampling (DLSS) tech that tends to give games a noticeable boost in frame rate (by lowering the render resolution and using AI to clean up the image), it ran at 46 frames per second. With DLSS set to auto and no other settings adjusted, the frame rate in 4K went up to 60 frames per second. Personally, I always lean on DLSS as much as any game will allow me to for those few extra free frames.

These are all very playable frame rates, whether you decide to go the ray tracing route or take advantage of DLSS in games that support it. Also, since the X17 can run these demanding AAA games at 4K/60 without much of a struggle, many other games that aren’t as demanding should be able to take full advantage of its 120Hz refresh rate display in native 4K.

I won’t lie: I wasn’t expecting this kind of reliable performance with this system, let alone with any other kind of thin-ish gaming laptop. I’ve seen similar specs in action before in other models, and I was less than impressed. While Alienware isn’t the first to use a 4K 120Hz display in a gaming laptop, or the aforementioned RTX 3080, it earns credit for cramming it all in a slim chassis that’s much more powerful, yet somehow quieter and cooler than some of the competition.

Digging more into what the X17 can do with its powerful components, its performance in Adobe Premiere Pro is as impressive as you might expect. During our test where we see how long it takes to churn out a 5-minute, 33-second 4K video, the X17 took three minutes, 22 seconds to get through the export process. For a more intensive benchmark, the PugetBench for Premiere Pro scored competitively with similarly specced gaming desktops, which is both to be expected (and that price) and impressive. Funnily enough, Apple’s M1 Pro and M1 Max-equipped MacBook Pros each handily beat Alienware’s score, as we noted in our review. Those outliers aside, you’ll be hard-pressed to find this kind of performance in many other gaming laptops out right now.

It goes without saying, then, that the X17 didn’t see my usual workload as much of an obstacle. I typically run about 20 tabs in Microsoft Edge, along with Spotify, Slack, and Affinity Photo, and the X17 didn’t miss a beat. I realized once that I accidentally had around 40 tabs open in minimized Edge windows, but not even that caused a noticeable hitch or slowdown.

The Windows Hello IR webcam here is good for logging in hands-free, but if you anticipate doing lots of video calls, the image quality is mediocre. The video feed looks passable if you’re in good light, but it proved unable to compensate for being rear-lit.

Battery life doesn’t seem to have been a high priority for Alienware since the X17 is primarily aimed at fast desktop-class 4K gaming performance while plugged in. But it’s not the worst we’ve seen, averaging almost four hours of mixed use with the workload that I mentioned above. It’d be tough for me to find a justification for lugging this heavy laptop away from its charger, though. It weighs about seven pounds, and its 330W charger is almost the size and weight of a literal brick. The good news about the power supply is that it recharges the X17 quickly, taking just over an hour to go from about 10 percent to full capacity.

This X-series chassis is new for 2021, as I mentioned before, and it’s generally a positive evolution of the bulkier M-series design. It has the company’s signature Alienware alien logo as its power button, and its rear, where you’ll now find nearly all of the ports instead of just some of them, looks like the exhaust of a futuristic spaceship. That’s where most of the hot air from the X17’s quad-fan cooling system and the plentiful copper heatsinks is dispelled.

In slimming down, Alienware didn’t make any major omissions in terms of ports. There are two USB-C 3.2 Gen 2 ports with PD charging (5V/3A), one of which is Thunderbolt 4. You also have two USB-A 3.2 Gen 1 ports, a 2.5-gigabit Ethernet port, an HDMI 2.1 port, a micro SD slot, and a mini DisplayPort 1.4. On the right side, there’s a lone headphone jack, and on the left, there’s a plug for the power cable. Just in case you were curious, the X-series gaming laptops, along with the M15 R5 and R6 models, don’t have Alienware’s graphics amplifier port, though it should support Thunderbolt GPU enclosures — not that this X17 needs any help in the graphics department.

The two-toned body design is a small but appreciated tweak, as are a few areas around the laptop where Alienware softened its look. It rounded off the laptop’s corners that were previously angular and, frankly, leaning a little too hard into the “alien” aesthetic. Though if you didn’t like the look before, your feelings may not be changed here.

You can usually count on gaming laptops to bring the power, a nice display, and maybe ports, too, but you can’t always depend on getting a good keyboard to go with it. This version of the X17 includes the ultra-low-profile Cherry mechanical key switches that were first introduced on the M-series, and they feel fantastic to type on. They’re quiet for mechanical keys, but they have a much more satisfying “thock” feel than membrane laptop keyboards. I’m impressed by how many powerful components Alienware was able to cram into the thinnest section of its chassis, which is just under 16mm thick (its rear section shoots up to 22mm), with room to spare for a mechanical keyboard.

The key layout is intuitive, though some may be upset that the numpad is missing. I did encounter the occasional issue with the keyboard’s responsiveness. Sometimes, my first key press wouldn’t register, so I’d need to try again. It didn’t feel like an n-key rollover issue — just some strange latency with accepting the first input here and there. There were other times when the keyboard would suddenly stop accepting any input whatsoever, requiring a restart. It felt like the kind of thing that can be addressed with a patch, but it’s not an encouraging sign that I’m experiencing it several months after this laptop became available.

One weird inclusion with the RTX 3080 is the light-up trackpad that illuminates when you touch it, though the light goes out after a few seconds of inactivity. It’s just for show, but nevertheless, it’s a basic trackpad with support for Windows Precision drivers and gesture customization in Windows. I’d like to see Alienware follow in Razer and MSI’s footsteps and implement bigger trackpads instead of superfluous features like trackpad backlighting. This current one is a little too small, almost seeming to signal that you should use a dedicated mouse instead, which is usually my advice with most gaming laptops anyway. Speaking of accessories, grab a gaming headset, as the built-in speakers aren’t anything special.

Earlier this year, I heralded the arrival of QHD screens as “the best thing to happen to gaming laptops” because I felt a future where 4K gaming on a laptop was commonplace still seemed far off. I was excited because lowering the resolution from 4K to 1440p would mean that games would still look very good, yet more reasonably priced components would be able to run them, thus driving down the total cost of laptops. We now have a growing amount of powerful, fully featured QHD options that are cheaper than 4K laptops and well worth the cost.

That leaves the Alienware X17 in a tough spot. On one hand, there’s nothing like gaming on a big 17.3-inch screen. The slightly smaller 16-inch 16:10 aspect ratio QHD screens that we’re thankfully seeing more of come close but don’t quite feel as immersive. In that way, there’s certainly a lot of fun to be had with the excessive screen real estate and power offered by the X17.

Furthermore, it easily proves its ability to play 4K games with finesse and that Alienware’s a little more serious about improving its chassis design. All of that progress is important, and if you’ve been waiting for a big, well-designed gaming laptop that delivers on the promise of 4K gaming on the go, this is it.

But for most people, it’s ultimately just too expensive. Plus, for the massive amount of power and cooling required to power 4K games, I just don’t think it offers that much better of an experience to warrant the cost versus more affordable, yet no less competently designed, laptops with sharp QHD displays. Pocket the rest of your money for games, a headset, a mouse, or a gaming monitor.