On February 20, a satellite image from celebrity Russia, about 30 miles from the Ukrainian border shows a military camp that has largely been emptied a week earlier, it was busy with troops and equipment, suggesting Russian troops are now on the move. While Russian forces have moved into Ukraine’s eastern Donbas region, a large scale attack is looming just to the north. The Wall Street Journal analyzed dozens of satellite images captured by maX our technologies and Planet Labs verified videos posted to social media and found that Russian troops and military equipment have moved out of large visible garrisons in Russia and dispersed into smaller, harder to track units along the northeastern border of Ukraine, suggesting what experts say is a military on the verge of a full scale attack.

The Russian troops have moved from there. Forward staging areas which are these large camps that you talked about to essentially much smaller, what could be jumping off points, so they’re moving to areas where they are in their final positions before they would have to move over the border, Russia had been amassing troops and equipment near Ukraine for weeks, which they said were for military exercises.

Satellite images from a camp in january Russia show a military training area being built up. Images from January 19 show that the camp has expanded and that it’s active. These tents are not snow covered, a sign that they’re likely being heated Here. Bullock identified BMW 27 Oregon’s which are multiple rocket launcher systems, battalions made up of what are likely to S-19 vehicles with guns designed to shoot shells, long distances and battalions of what looked to be infantry fighting vehicles. But by February 12, the area had mostly emptied out around the same time.

Satellite images show troops and equipment building up in several regions closer to the Russian Ukrainian border at a training area East of course, satellite imagery from february 9th shows a line of empty heavy equipment transporters likely waiting to be loaded with tanks. Then four days later, on february 13th, we can see the camp, which Bullock says has expanded in size significantly over the past few weeks is active, the overturned dirt signals, people and equipment are moving around.

Also on the 13th, we see Russian military presence in two other key locations close to the Ukraine border in the Bryansk region, We seek Lenovo Airbase where a new grouping of tents are visible again with signs they’re being heated insularity, which is a camp used regularly by the Russian military. We see a new field camp and signs of movement in the snow North of Belgorod, we can see a helicopter camp with more than 12 attack and transport helicopters and on February 15 in value. Key, we see another field of attack choppers on February 15, Russian officials signaled they were de escalating and withdrawing some troops from the Ukrainian border. 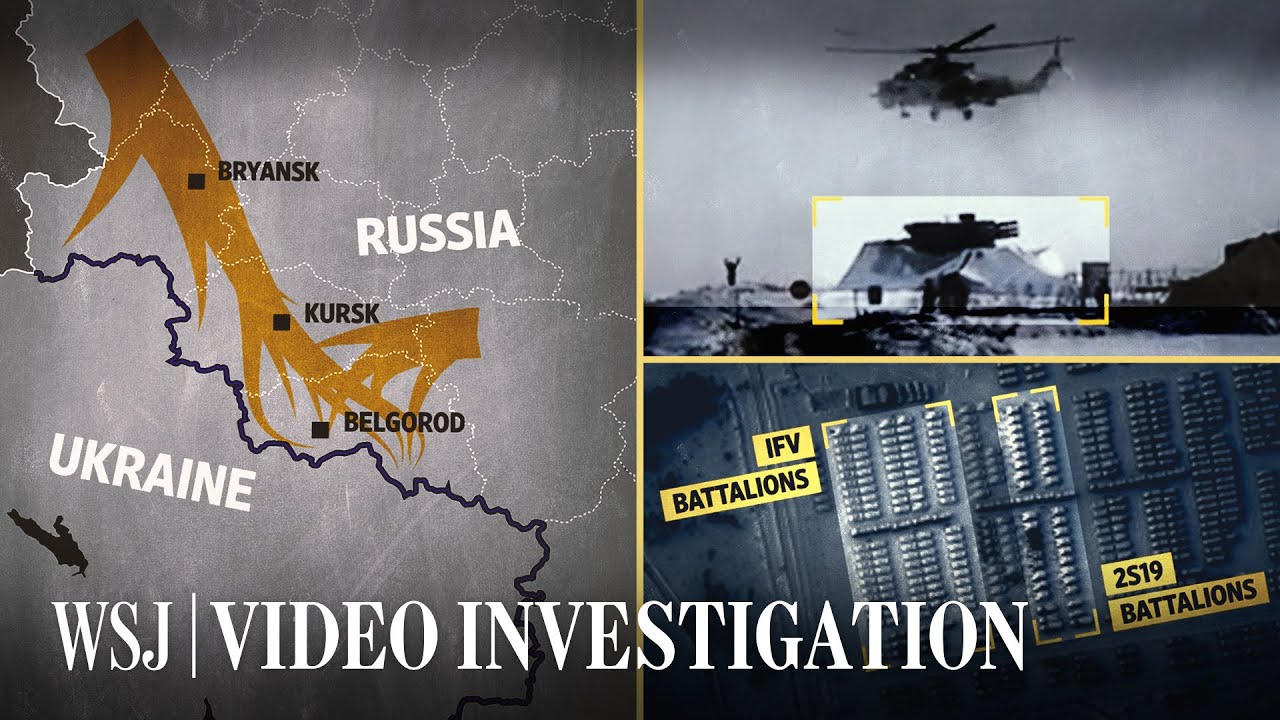 Over the following days, cloudy weather obstructed views of many key border locations from satellite images, but videos posted to social media suggest a continued march of soldiers and equipment towards the border with Ukraine showing what appears to be the Russian military on the verge of attack, the Ukrainian city of Kharkiv is in striking distance and more troops can quickly be added to the Donbas region. The Ukrainian capital of Kiev is about 300 miles from the border. This video from Belgorod, which the poster said they filmed on february 15th shows a train traveling southwest towards the border carrying various equipment from the fourth tank Division, including towed howitzers which shoot artillery shells. A video posted february 16th from Belgorod shows the fourth tank division heading south near the border. Bullock says they likely came straight from Moscow, which is significant because it’s highly unusual for them to be so far outside their regular training area.

On february 16th in tomorrow Vca we see an attack helicopter landing at a civilian airfield. Experts have also identified a short range air defense system. Bullock says it’s partially obscured by a tarp, a sign of camouflage, not storage and it’s in a position to be used. A day later, a video posted on february 17th, roughly 16 miles from the Ukraine border in real school shows Russian military vehicles including a heavy equipment transporter with the tank.

Then in a video posted the next day on february 18th, we returned to tomorrow Vca where Bullock first identified an air defense system.

He says that on the air defense system. In this clip, the radar which can be seen here is now in use. In that same video. We see T 98 tanks positioned on the edge of the woods, facing the road, indicating vehicles may now be dispersing further into wooded areas out of sight. You’re starting to see equipment moving on its own under its own steam.

So you’re seeing tanks driving around on roads instead of being transported by trains or heavy equipment transporters. And then on top of that you’re also seeing other small adoptions Forces would likely undertake before they engaged in combat. One example can be seen in videos like this. One posted in Belgorod on February 18, experts suspect these markings identify Russian vehicles or convey other tactical information tanks hiding in the edge of the woodland and moving into smaller camps that are much more difficult to find. Satellite images from February 21 and 22 show one of these remote camps where land is likely being cleared for additional troops and we can see a new field hospital added to a garrison on the outskirts of Belgorod, suggesting possible casualties to come