NICK SCHIFRIN: With the stroke of a pen, Russian President Putin claimed to redraw the map of Europe. He recognized the self declared republics Donetsk and Luhansk that, for nearly eight years, have been partially controlled by Russian-backed separatists.

In Donetsk tonight, pro-Russian Ukrainians waved Russian flags, after Putin called Ukraine a colony with a puppet regime and warned of further fights. VLADIMIR PUTIN, Russian President (through translator): We demand those who took over and retain the power in Kyiv to immediately stop combat activity. Otherwise, the responsibility for continuing the bloodshed will lay on the shoulders of the Ukrainian regime.

NICK SCHIFRIN: And, tonight, there is worry that bloodshed is already beginning. Putin ordered a — quote — “peacekeeping mission” into Donetsk and Luhansk. President Biden imposed sanctions on anyone doing business in rebel-held areas, and a senior administration official warned of further penalties if Russia invades.

Inside rebel-held territory, with local cameramen filming, authorities have evacuated 30,000 mostly women and children and called up men, young and old, to be ready to fight Ukraine. Russian forces are backing them up.

U.S. officials tell “PBS NewsHour” at least one-third of Russia’s 150,000-plus troops on the border have already left their staging areas and moved to attack positions. That’s documented by new satellite images and new deployments of armored equipment and troops moving toward the border, including along two locations close to Kharkiv in Ukraine’s east. Independent researchers say Russian troops around Ukraine not only in the east, but also south and north in Belarus, where exercises that were supposed to end yesterday have been extended indefinitely.

S. sent the letter to the U.N. that Russia was — quote — “creating lists of identified Ukrainians to be killed or sent to camps following a military occupation.” JAKE SULLIVAN: We also have intelligence to suggest that there will be an even greater form of brutality, because this will not simply be some conventional war between two armies.

It will be a war waged by Russia on the Ukrainian people. NICK SCHIFRIN: On Sunday, in the Black Sea port city of Odessa, those Ukrainian people wrapped themselves in the Ukrainian flag and chanted in Russian, “Russians, go home.” “NewsHour” Volodymyr Solohub was on scene. VOLODYMYR SOLOHUB, Producer: This predominantly Russian-speaking city back in 2014 still had a strong pro-Russian elements. Now, eight years later, and with Russian aggression looming just around the corner, they say that the choice of this city is very clear. 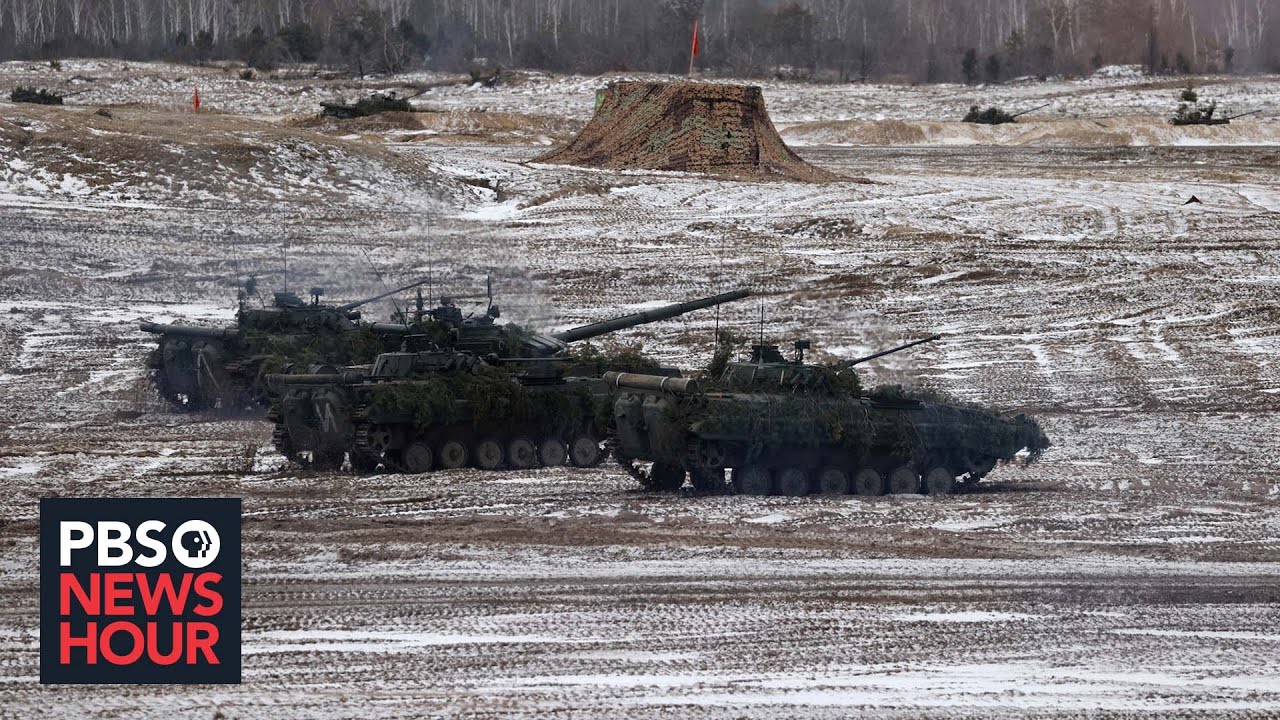 We need guarantees of security for Ukraine now. NICK SCHIFRIN: Odessa resident Ori Slava (ph) moved from Western Ukraine five years ago. VOLODYMYR SOLOHUB: Would you say that, in those five years that you have been living here, you see a change in Odessa? WOMAN: Yes, a lot of change, and a lot of people here start to speak Ukrainian language, start to believe in Ukraine, and start to read Ukrainian history.

And they believe that Odessa will be Ukraine forever.

JUDY WOODRUFF: And Nick joins me now for more. So, Nick, a fast-developing story today. What more do we know about what’s happening on the ground? NICK SCHIFRIN: Judy, Russian media are reporting that there are armored columns of Russian forces moving from Russia into Donetsk and Luhansk. And there are videos on social media that are still unverified of Russian forces moving.

But there is no confirmation at — right now that the — by the United States that those forces are in fact moving into Donetsk and Luhansk. But the agreement, as we reported, that Putin signed with the self-declared separate leaders does allow for Russian bases in Donetsk and Luhansk. It allows for Russian military infrastructure in those separatist areas, and it allows for “joint protection” — quote, unquote — of the border, which means, Judy, Putin is still maintaining a little ambiguity.

He’s laid the ground for — the groundwork for war, but hasn’t actually declared war. He laid the foundations of formal military presence, but hasn’t defined it.

We still don’t know his final move, which, of course, is his intention, to keep us guessing. JUDY WOODRUFF: And, Nick, I know you have been talking to administration officials. What is known at this point about what the U.S. is going to do?

NICK SCHIFRIN: Yes, so, as I just reported, the executive order that President Biden has just released bans all persons (AUDIO GAP) from working or operating in the self-declared republics of Donetsk and Luhansk and gives the U.S. the authority to sanction anyone who’s working there.

But a senior administration official talking to journalists just now left it ambiguous whether the movement of Russian forces from Russia into occupied Donetsk and Luhansk would actually trigger that massive group of sanctions that the U.S.

and its allies have been threatening. The senior administration official said — quote — “Russian forces moving into Donbass would not be a new step. There have been Russian troops in the Donbass for eight years.” But the official did say that there would be further moves tomorrow. They would continue to watch what Russia does.

And those moves tomorrow could include more sanctions as well, Judy. JUDY WOODRUFF: All right, Nick Schifrin following this story throughout. Thank you, nick. NICK SCHIFRIN: Thank you..