Hi, I'm Craig, and this is Crash Course Government
and Politics, and today I'm gonna talk about an aspect of American elections that is probably
most familiar to you, at least if you're an American and you sometimes watch TV, or look
at the internet, or read a newspaper, or breathe air. I'm talking about elections, which get a lot of
attention here in the US, and on Crash Course, possibly because they present a relatively straight forward narrative, and it's easy for the media to cover. But we're not going to focus on media coverage today.
No, instead, we're going to look at why we have elections in the first place, and the institutions and procedures that structure the way elections work in America.

We might even compare them to elections in other places, but I can't make any promises. [Theme Music] Before we get into the nitty-gritty of how
elections work in the U.S., it might be a good time to ask a question that rarely gets asked,
"Why do we have elections in the first place?" A simple answer is, "Complexity." America's
too big and complex to hold public referendums on individual issues, although some states,
like California, try to do it.

So, instead, we choose representatives. In other words, we vote for people,
not policies. Elections are as good a system holding these representatives accountable as any. Well,
at least they're better than violence or public shaming. Political scientists and economists have a
more complicated way of describing this in terms of "adverse selection." Because why
would we want a simple answer when we have political scientists and economists around?
Well, they gotta do somethin'. Adverse selection is a problem that can arise when we make a
choice but do not necessarily have all the information we need to make that choice.

Kind
of like when you buy a used car. Elections help to solve this problem because
they are ideally competitive. The competition creates incentives for candidates to provide
information about themselves and to make most of that information accurate since their opponent
will call them out for any statements that are less than truthful. At least, that's what
we hope will happen. Elections also supposedly make candidates
more accountable since they provide voters a chance to get rid of bad actors. Of
course, this only works when elections are competitive, and, as we'll see in a later
episode, many elections in the U.S. really aren't. You might think that since elections are so
important to our politics that they would be featured prominently in the Constitution,
but yeah, no. The Constitution does set up a few basic guidelines that structure American
elections, but most of the important rules that define the way elections are carried
out come out of state laws, legal decisions, and local administrative practices.

So what
does the Constitution say about elections? Not a lot, as it turns out, except when it
comes to choosing the president. President just gets everything…
President's so important. The Constitution does lay out the qualifications
for running for federal office–which we already when over in our episodes on Congress and
the President — and it describes the number of Representatives and Senators. But mostly
the Constitution leaves elections up to the states. Article 1, Section 4 says, "The times,
places and manner of holding elections for Senators and Representatives, shall be prescribed in
each state by the legislature thereof; but the Congress may at any time by law make or alter such regulations,
except as to the places of choosing Senators. " And the Constitution was later changed to
allow for direct election of Senators with the Seventeenth Amendment, so that last clause
doesn't matter so much anymore. The Constitution does say more about the way the President
is chosen indirectly through the Electoral College, but the framers messed that up so
badly that they had to amend the Constitution after the election of 1800. The Twelfth Amendment,
which basically means that the President and Vice-President come from the same political
party — although it doesn't actually say that — fixed the electoral process.

So now it's flawless.
But it's still indirect and the qualifications for the electors who choose the president
are still left up to the states. Some Constitutional amendments also help to
structure American elections. The Twenty-Fourth Amendment outlawed poll taxes, which made
it easier for poor people to vote, and the Twenty-Sixth Amendment lowered the voting
age from twenty-one to eighteen. In general, when Congress addresses voting issues, it's
to try to expand the pool of voters. Although the Constitution doesn't specify
when elections happen, it does give Congress the power to do so, and it requires that the
day on which the electors choose the president has to be one single day. This is in Article
Two: "The Congress may determine the time of choosing the electors, and the day on which
they shall give their votes; which day shall be the same throughout the United States." Congressional laws also help structure elections
by making them more fair. The Voting Rights Act of 1965 set up a number of systems to
increase voter participation by minority groups, especially African Americans.

And Congress
also set up the Federal Election Commission, which has some say over elections. I'll tell
you who should never be allowed to vote: eagles! You're gerrymandered out of here. But generally, following the Constitution,
most aspects of elections are under the control of the states. State laws define how candidates
are nominated and get on the ballot, and they can influence the operation of political parties.
State laws also determine registration requirements for voting and set up the location and hours of
polling places, which vary a lot from state to state. Probably most important for federal elections,
state decide the boundaries of Congressional election districts, although not the number
of representatives each state has, which is determined by the state's population. We'll talk
more about election districts in a future episode. That's what gerrymandering has to do with.
Remember when I gerrymandered the eagle? Yeah, that's a preview for what's coming. Although this is not always true in every
case, as a general rule of thumb, the federal government is more likely to pass laws that expand
voting, and states are the government that restrict voting, especially through registration requirements and
taking the vote away from people convicted of felonies. 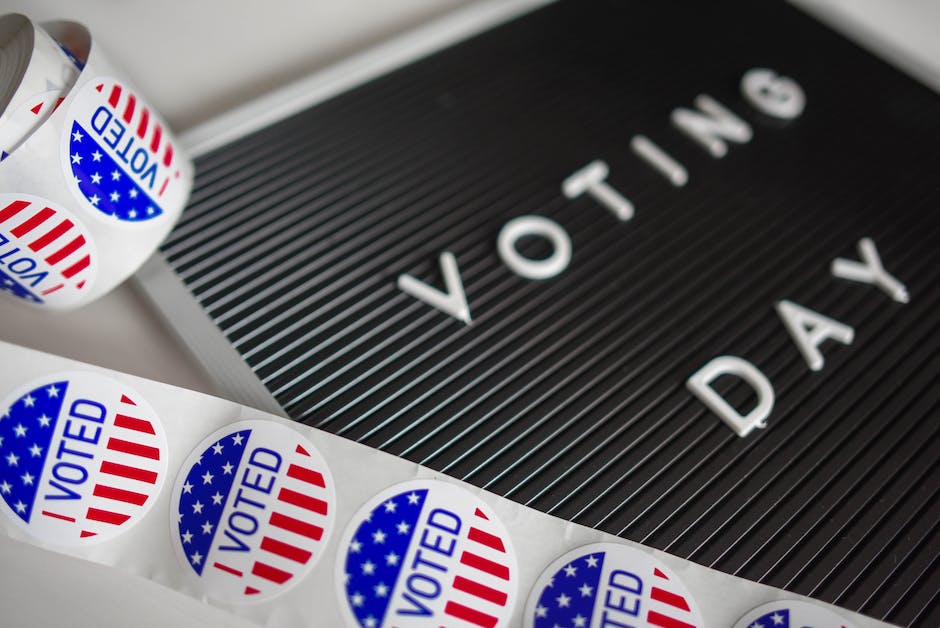 One important aspect of American elections
that has been set up by state laws is the way that winners have been decided.
We like to say that in America, majority rules. But for the most part, this isn't really true,
at least as far as elections are concerned. In most states, and in most elections, we
follow the Plurality Rule, and this has important consequences for American politics. Let's
go the Thought Bubble. Under the Plurality Rule, the candidate with
the most votes wins. The number does not have to be a majority, and the more candidates in the
race, the less likely anyone will get the majority. Suppose your election has four candidates:
A, B, C, and D. Candidate A gets 20% of the vote, Candidate B gets 30%, candidate C gets
25%, and Candidate D also gets 25%. That should add up to 100%.

It does? Thank goodness! Okay,
so no one has a majority here, so who wins? Candidate B, of course, because she has the
most votes, 30%. Now you'll notice something about this election that may be a bit of a
paradox: the significant majority of voters in this election, 70% in fact, have chosen
Not B. Yet, B is that one that wins. This is why we need to be very careful when we say
that majority rules, because in many cases, it doesn't. But in some cases, it does. Some states do
have a majority rule in their elections. In these states, if no candidate gets more than
50% plus 1 of the vote, then the top two vote-getters go on to what's called a run-off election. In this
second election, you almost always get a majority. In many cases, we also say that American elections
are "Winner take all." This is the case in forty-eight out of fifty states when it comes
to electoral votes. What this means is that the winner of the election gets 100% of the
state's electoral votes, even though it's likely they wouldn't have carried 100% of
the votes.

It is possible for a state to decide to award its electoral delegates proportionately, based
on the percentage of votes that a candidate receives, or even by electoral district, although the latter rule
causes some problems, as we'll see in another episode. Thanks, Thought Bubble. So, the Plurality
Rule can result in the majority of people being represented by someone they voted against.
This seems like a bad system, so why do we have it? The main reason is efficiency. Under
plurality rule, you get a definite winner that you might not have under a majority rule.
It also allows for a greater variety of candidates to win, at least potentially. And it has one
key result for America's political system: it pretty much ensures that we will only have
two viable political parties. The concept that plurality rules create two-party
systems is explained by something called Duverger's Law. Here's how it works. Imagine political parties
on a continuum from extreme right to extreme left. Most voters will not fall into either extreme,
so the masses of party followers will coalesce around the center-right and center-left. In these
conditions, there's no incentive to form a third party because it's likely to take votes away from the centrist
party, and thus throw the election to the other party.

Let's say that you're on the right of the
political spectrum. You like the ideas of the center right party, but you think they're
a little bit weak, and you'd like to see someone speak up more for your right-most ideas. You
could vote for the candidate whose ideology and policies are more to your liking, but
they're not likely to win. Remember, most people prefer center-right ideas over extreme-right
ideas. That's why they're extreme. So, the candidate you would most like to support isn't
going to win, but what's worse for you is that by voting for them, you take away votes
from the candidate you partially agree with.

Since people know that third-parties almost never
win, we're left with only two parties in the U.S. Now, Duverger's Law is important for political
scientists, and it explains broadly why we have two parties, but a look at American politics
in the second decade of the twentieth century suggests that parties are more extreme than
the model would lead us to believe. The polarization of parties is the subject of another episode
on the composition of parties and how they reflect political ideologies. But for now,
it's still useful to understand how elections themselves work to shape the party system
we have in the U.S. This is what we sometimes call a structural or institutional view of
politics, and it's the kind of thing political scientists really, really like. We'll look
closely at the actual political parties and who votes for which one in other episodes.
But I hope we've provided a little bit of insight into how elections work in the U.S.